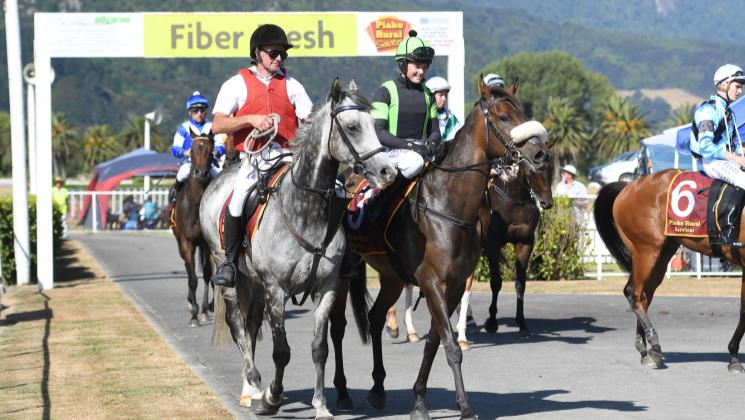 14 February 2020
Elen Nicholas is all smiles on return to scale aboard Deshi. Photo: Peter Rubery Race Images
Cambridge apprentice Elen Nicholas kick started her flat career perfectly when she took out the Pike Racing 1200 aboard $37 shot Deshi at Te Aroha on Wednesday.  Having commenced her career in New Zealand as an amateur rider Elen decided to focus on a career in the saddle and certainly made a big impression with her first ride as a professional jockey.
Trained by Craig and Shaun Phelan, Deshi, a four-year-old son of Battle Paint made the most of Elen’s 4- kilo claim with a very bold showing, leading from start to finish.
Owned by Ngongotaha pub and fish and chip shop manager Ming Zhu, who has had horses with the father and son partnership for over 10 years, Deshi has really come into his own recently.
"He is developing into a promising horse," Craig Phelan said.
The Phelans also trained Deshi’s dam Ason and currently have his three-year-old full sister and two-year-old full brother in the stable for his owner.
In preparation for Elen's first ride as an apprentice, the Phelan family purchased a new set of colours.  To ensure she would have every bit of luck on her side, they then got the colours blessed by Colm Murray’s mother.  The Irish catholic “mammy” of Shaune Ritchie’s stable foreman is currently visiting the country.
As a token of his appreciation Phelan gifted Nicholas with a pounamu toki, symbolising strength and courage.
"Elen has worked really hard with becoming an apprentice,” he said.  "She has a great work ethic and is very humble. She just gets on with things."
Welsh born and bred, 23-year-old Elen is apprenticed to Cambridge based trainer Andrew Campbell.
"Elen is very hard working and she deserves all the successes she can get.  I’m happy she's got off to a great start," he said.
For an extended interview with Elen Nicholas see LOVERACING.NZ on Monday 17th February.

Yearn thriving ahead of local assignment

Miami Bound to resume at Caulfield