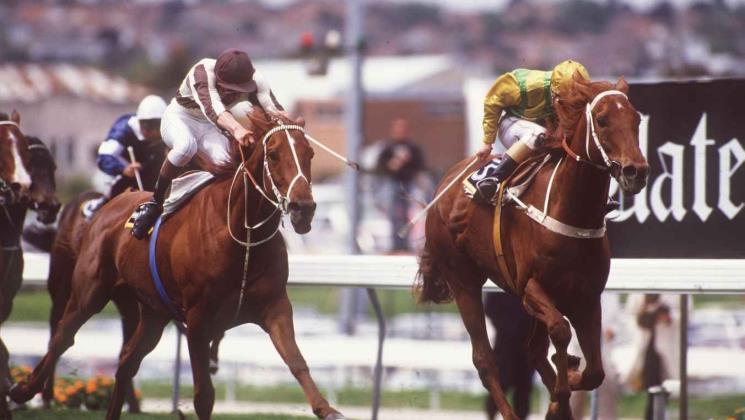 17 December 2019
From exuberant celebrations to spectacular two-horse battles, there are plenty of moments that can be considered ‘iconic’ in this sport of ours. Here are a few at the top of our list:
Brenton Avdulla Takes a Bow
‘Loving it on the line’ was taken to a new level by Brenton Avdulla when he bowed aboard Lasqueti Spirit in the 2016 Oaks at Flemington. The Australian jockey cheekily stood high in the irons and took his leave, as he and Lasqueti Spirit claimed the Group 1 in stunning fashion. The stewards, however, did not appreciate the theatre, fining Avdulla $1000 for the act (a price we’re sure he was happy to pay!). Dubbed 'The Race of the Century', two Kiwi greats, Our Waverley Star and Bonecrusher drew clear of the 1986 W.S. Cox Plate field and settled down to a two-horse war. Equally as iconic was race caller Bill Collins’ call, questioning the daring tactics: "Here come the New Zealanders... have they gone too early?" The answer was probably yes, but he didn't take into account their fighting spirit. The two horses battled down the straight before Bonecrusher triumphed over Our Waverley Star by a neck.
Secretariat’s 1973 Belmont Stakes Victory

It’s really something you need to see to believe and even then, you’ll question your eyes! The then three-year-old ran the 1½ mile course in 2 minutes and 24 seconds and won by an extraordinary 31 lengths, a record which still stands today. The victory is considered so iconic in racing’s history that there are winning tickets, which were never cashed in, still circulating as memorabilia of the great event.
Michelle Payne’s Melbourne Cup Victory

In 2015 and 154 years on from the great race’s origin, Michelle Payne made history when she became the first female jockey to win the Melbourne Cup onboard rank outsider Prince of Penzance. In what was a driving finish, Prince of Penzance powered home late to hold off Max Dynamite, and Criterion, who came in third. Sunline’s clash with Fairy King Prawn is arguably one of the most dramatic clashes in Hong Kong racing history. Sunline drew clear of the field before the Hong Kong superstar appeared from the pack, setting the stage for what was to be an iconic two-horse battle. Sunline gave her all to hold off Fairy King Prawn by the narrowest of margins. The win came in her second trip to Hong Kong, after being well beaten in the Cup the previous year.
Do you know what else is rather ‘iconic’? Our current giveaway for one lucky racegoer to enjoy a raceday wardrobe refresh, with a $500 voucher for The Iconic!! Sounds like a bit of you? Enter on our Facebook page to be in the draw to win.