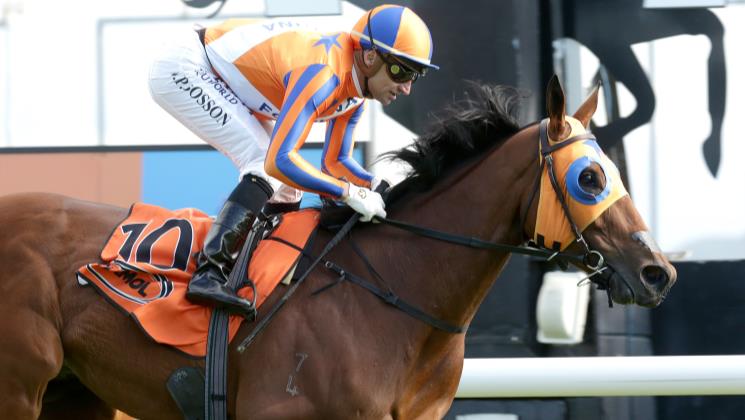 8 October 2019
Melody Belle will contest the Gr.1 Empire Rose Stakes (1600m) at Flemington on November 2. Photo credit: Trish Dunell
Reigning New Zealand Horse of the Year Melody Belle will head across the Tasman in the coming weeks after becoming the first horse to win the Hawke’s Bay Triple Crown at Hastings on Saturday.
The Jamie Richards-trained mare will bypass the Gr.1 Cox Plate (2040m) in favour of the Gr.1 Empire Rose Stakes (1600m) at Flemington on November 2.
“Jamie reported that Melody Belle has come through her Triple Crown campaign in great order and he cannot fault her physically,” Fortuna Syndications manager John Galvin said.
“We did give serious consideration to the Cox Plate, however, the consensus reached was to go for the Empire Rose instead and if she were to race well in that event, then the option of backing up into the MacKinnon Stakes (Gr.1, 2000m) would be available to us.”
Melody Belle had two previous campaigns in Australia, with the first culminating in victory in the Gr.2 Sires’ Produce Stakes (1400m) in Brisbane as a juvenile, and Galvin is looking forward to a return to Australian shores.
“We have been there before. We won a Group Two race with her as a two-year-old and then we took her back as a three-year-old in the autumn and didn’t have any luck,” he said.
“Now is the time to go back and show her off to the Australians.”
Galvin’s Fortuna Syndications is experiencing a great run of late and paid tribute to Te Akau in Fortuna’s success.
“We have had 15 starts this season for five wins and have run in the money on 13 occasions,” he said.
“Everything is going very well and it is great to be associated with a great stable like Te Akau.”
Melody Belle was purchased out of Haunui Farm’s 2016 New Zealand Bloodstock Premier Yearling Sale draft by Te Akau principal David Ellis for $57,500 and has won a record nine Group One races in New Zealand.