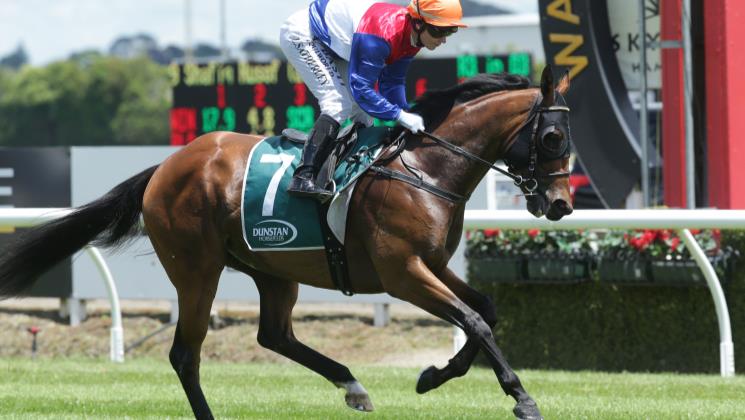 Cornege cruising along with promising gallopers

Pop Star Princess will likely head to Te Rapa on October 4 after her promising run at Ruakaka on Saturday. Photo credit: Trish Dunell

A win by De Koning at Ruakaka on Saturday, along with a promising run from stablemate Pop Star Princess, has kept the spring in the step of Cambridge trainer Fred Cornege.

Cornege and his wife, Lindsay, are part-owners of both five-year-olds and, along with their regular jockey Lynsey Satherley, they weren’t surprised by the results last weekend in which De Koning scored decisively over 1600m and Pop Star Princess kicked back strongly for a fresh-up sixth to Orakei Overlord over 1400m.

“I was happy with them both,” Cornege said. “De Koning has got the ability, but he’s a bit of a wuss and needs to man up a bit more. He could be coming right now.

“As for Pop Star Princess, she lost a length on the home turn and came back again. It was only her first run and she’d just had a soft trial (which she won) here at Cambridge.

“I was going to take Pop Star Princess down to Hastings for the last day (October 5), but there’s an open 1400m at Te Rapa the day before that could suit her better.

“De Koning will run the same day in the Te Awamutu Cup over 1600m.”

Both horses have now won three races apiece and Pop Star Princess has shown more promise with her seven placings, including a third to Bostonian and fellow Group One winner Santa Monica in the Listed Counties Bowl (1100m) at Pukekohe last year.

“Pop Star Princess always puts in. She’s weighed-in 17 times from her 19 starts,” Cornege said. “She can have a go at the Counties Bowl again.”

Pop Star Princess and De Koning make up half the current team Cornege has in work and at 70 years of age he’s enjoying pottering around with a small team.

“I’m just coasting along and enjoying it,” he said. “The other two I’ve got in work are young ones. I’ve got Princess Catharina in on Friday (at Taupo) and I bought an Atlante gelding off gavelhouse.com for $500 earlier this year. He’s a half-brother to a Singapore Derby winner (Clint).”

While thoroughbreds are Cornege’s focus these days, it hasn’t always been that way. In fact, he and his wife have vast experience with different breeds and horses in various roles.

“I did two stints with a New Zealand business team in Japan. We had some nice young horses when we were both competing, but it was an expensive sport with a young family and we concentrated on producing and selling them.”

The Cornege’s daughter, Christine, has followed in her parents’ footsteps in the equestrian field and finished second in international class in Equador last weekend.

Cornege’s CV also includes stints working for such studs as Woodleigh, Trelawney and Paramount and that led to establishing his own thoroughbred stud, Seattle Lodge, at Pahiatua.

“We stood Pat’s Victory, Mr Ironclad, Shifnal Prince and Porter Rhodes,” Cornege said. “It was hard work, but we were going well before the sharemarket crash (in 1987). That changed everything.”

The Corneges shifted permanently to Cambridge 15 years ago and their services have been well-used for pre-training over the years. But it’s as a trainer that Cornege gets the most satisfaction, particularly with the likes of Pop Star Princess.

He first tasted success as a trainer when Big Quick won at Tauranga in January 2011 and he also picked up a double with Shredder that season, then later produced the handy performer Thee Quiet Achiever and impressive 10-length debutante King Willem, who was then sold overseas.

Since then Cornege has ticked over with his small team and seems poised to add to his 18 wins, maybe even picking up a double at Te Rapa on October 4 as he cruises along.