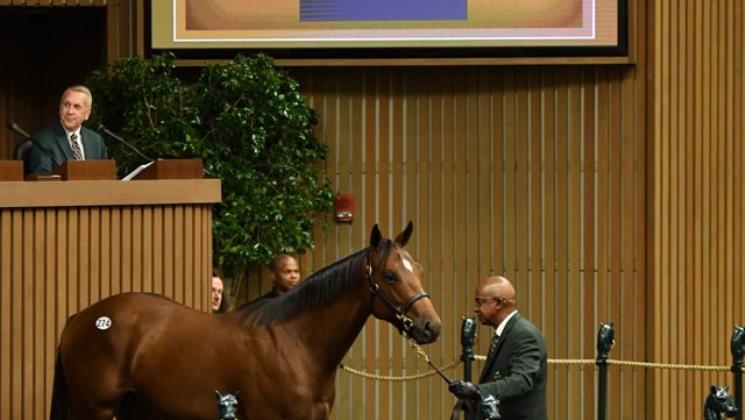 US$4.1 million for Bounding colt

11 September 2019
The Curlin colt out of Bounding sold for US$4.1 million at Keeneland’s September Yearling Sale. Photo credit: Supplied
Former New Zealand Champion Sprinter Bounding has had an outstanding start to her broodmare career with her first foal selling for US$4.1 million at Keeneland’s September Yearling Sale in Lexington, Kentucky, on Tuesday.
The son of dual US Horse of the Year Curlin was the subject of a spirited bidding duel between global powerhouses Coolmore and Goldolphin, with the latter coming out on top through the final bid of Sheikh Mohammed Bin Rashid Al Maktoum.
Bloodstock agent Anthony Stroud, who signed the tickets for Godolphin’s purchases, was pleased with the purchase.
“He’s a lovely well-balanced horse from a good farm, we liked him very much,” Stroud said. “He was just a wonderful mover and had athleticism.”
The colt was sold by breeder Barbara Banke of Stonestreet Farm, who purchased Bounding as a broodmare for A$1.9 million, and she was happy with the result.
“I expected that he would be one of the sales toppers,” Banke said. “I was confident that he would be well received. He’s a beautiful colt whose mother was a sprint champion in New Zealand.”
Bounding’s former New Zealand owner Gary Harding watched the sale live and he was delighted for Bounding’s new connections.
“It’s the highest price since 2010 (at the September Sale), and to date I think it’s the highest price in the States this year,” he said.
“That says something. It must have been a fantastic atmosphere and great for the vendors. To have those powerhouses competing against each other, how exciting does it get? It’s fantastic.”
Harding has formed a good association with Banke since she purchased Bounding and he said she has thought highly of the colt for some time.
“I spoke to Barbara when I was over for the Easter Sales and she explained to me that he was something special,” Harding said.
“At that stage they were even considering keeping him, but obviously decided against that.
“Apparently he was an outstanding individual. I got up and watched him get sold. He did parade well and looked pretty smart and for that sort of money he must have been.
“It was a fantastic result. I am very pleased for them.”
Harding purchased Bounding as a yearling for A$425,000 and she went on to win eight races, six of those at stakes level, including the Gr.1 Railway Stakes (1200m).
“She brought us a lot of joy,” Harding said. “When we were racing her it was just thrill after thrill and now she has gone on to do it as a broodmare, let’s hope he can run.
“It’s a pretty good family. Her half-brother (Anthony Van Dyck) ran second in the Irish Derby (Gr.1, 2400m) and won the English Derby (Gr.1, 2400m). It’s a very strong, international pedigree.
“When we bought her I thought it was a fantastic pedigree and it crossed up pretty well and that proved to be the case.”
Harding had held hopes of purchasing Bounding’s second foal, but he said this result may have put a stop to that.
“She has got a filly by War Front at foot and apparently that is a pretty nice individual also,” he said.
“No decision has been made on selling it. We expressed an interest earlier on, but I think we might have to shelve that idea.
“I think that’s the end of our involvement with her other than keeping an interest in her.
“They (Stonestreet Farm) are very good, my wife keeps in touch with them and they send her updates and pictures when the foals are born, it is very lovely.”