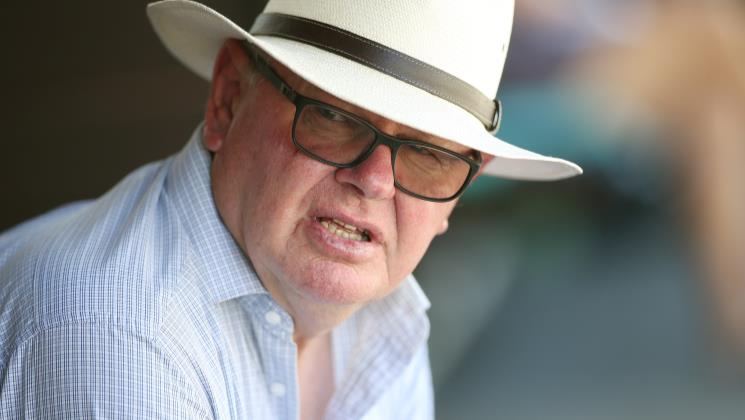 9 September 2019
Outstanding Contribution to Racing Award recipient Murray Baker.  Photo credit: Trish Dunell
Murray Baker has now been recognised with two of the highest honours in New Zealand racing, but he’s not about to rest on his laurels.
Last year Baker was inducted into the New Zealand Racing Hall of Fame and on Sunday evening he picked up the Outstanding Contribution to Racing Award at the New Zealand Thoroughbred Horse of the Year Awards, held in Auckland.

“It rates right up there with the Hall of Fame (induction),” Baker said. “I was quite surprised to get it, but I knew something was up when I found out my family were all going to be there for the night.
“It’s an honour to get the award and it was special to have my daughter, Reidun, and her husband, Dan, come up from Martinborough, and Bjorn and his wife, Andrea, fly over from Sydney. It was great to have my old Aussie mate Brian Nutt there, too.
“It really seems like a distant memory when they start reeling off some of the big winners I’ve had.”
Baker flew in from Melbourne on Sunday after watching his promising three-year-old Long Jack win a maiden 1400m at Ballarat last Friday and stablemate The Chosen One finish a game fifth in the Gr.2 Feehan Stakes (1600m) at Moonee Valley on Saturday, while son Bjorn made a fleeting trip fresh from a double at Randwick, including a runaway win in the Gr.2 Chelmsford Stakes (1600m) by last-start Group One winner Samadoubt.
Adding to the memorable evening for Baker, he and his training partner, Andrew Forsman, were the recipients of the New Zealand Trainer of the Year Award for the third successive year and fourth time in five years, while the stable’s dual Group One star Madison County was a dominant winner of the Champion Three-Year-Old Award.
Baker and Forsman have completed seven seasons in partnership and the stable has grown from strength-to-strength, achieving a record-breaking 143 wins two seasons ago. This past season the partners wound up as leading trainers with 112 wins, 25 black-type winners and more than $3.8 million in prizemoney on the local scene.
Baker was quick to pay tribute to Forsman’s input for another wonderful season.
“The part he plays in the operation is huge,” Baker said. “I couldn’t wish for anyone better. He’s got an exceptional talent and understands the game. He’s great with the staff and patient with the horses.”
Baker and Forsman have prepared 693 New Zealand winners together and 105 Group or Listed winners on the local front, plus an Australasian total of 32 wins at Group One level. Before taking Forsman on as training partner Baker trained successfully for three seasons with his son, Bjorn.
“I’m proud of them both,” Baker said. “Bjorn is absolutely flying in Sydney. He’s done it on his own and he’s built up a great team.”
However, on Sunday night the spotlight was well and truly on Baker and deservedly so. With the support of his wife, Marianne, he has gone from a fledgling trainer in Woodville in the 1980s to climb to the top of the ladder as a New Zealand trainer.
Baker attributes his shift north to Cambridge in 2000 as a turning point in his training career.
“It’s known New Zealand breeds a world-class product and being up here in the Waikato close to the main studs has given me a chance to get a better class of horse. It’s all a numbers game and being hands-on has helped.”
Baker has also earned the utmost respect in Australia, having continuously made successful raids on feature events.

He has won 21 Group One races in Australia, more than any other New Zealand trainer, and has enjoyed Group One success in four Australian states. And it is that pursuit of major Australian prizes that keeps Baker going.
“I’m addicted to Australian racing,” he said. “I love the thrill of taking a horse over there and winning one of their big races. I get withdrawal symptoms when I can’t find one to take over.
“One thing I realised early on was to take on the Aussies you really need a staying horse. Otherwise you’ve got to have an exceptionally good sprinter-miler, like Turn Me Loose.
“If you’ve got a staying horse with a bit of class and a good temperament you’re in with a show.”
Baker has proved that theory time and time again with the likes of Eagle Eye, Prized Gem, The Phantom, Lion Tamer, Nom Du Jeu, Bonneval, Dowry, Harris Tweed, Jon Snow, Mongolian Khan and one of his personal favourites, Dundeel.
Baker is at a stage in his life when most people his age would be sitting back and relaxing, but he has no thought of doing that.
“I’ve been training for over 40 years now and I’m still enjoying it,” he said. “It’s my way of life and I couldn’t see myself doing anything else.
“I love the banter when going down to the Cambridge track in the mornings. We’ve got a terrific young lot of trainers at Cambridge and some good old mates, too.
“I’m always looking for that new horse who comes up to be a good one. It’s hard to say no to a good horse.”
Baker and Forsman have purposely taken a quieter approach to the start of the new season in New Zealand, preferring to leave the horses out spelling a bit longer.
“We’ve got a lot of unraced three-year-olds just waiting to start off,” he said. “And there’s the likes of Holy Mongolemperor, who ran a second at Hastings. I think he’s a very good horse.”
While slow on the local front, Baker and Forsman have already made their mark in Australia with Long Jack’s Melbourne victory being preceded by Quick Thinker winning the Gr.3 Ming Dynasty Stakes (1400m) fresh-up at Rosehill, while stablemate Rhaegar finished fourth, four and a half lengths behind his stablemate.
“Quick Thinker and Rhaegar will both aim for the Spring Champion Stakes (Gr.1, 2000m). Rhaegar just needs a good track,” Baker said.
“Long Jack won well and I think he could be a good horse. He’s on a path to the Victoria Derby (Gr.1, 2500m) and I was happy with The Chosen One’s run. He was three-wide and had to do a lot at the Valley. He’s only a four-year-old and was racing against older horses and lacks a bit of ringcraft.
“He’ll go for the Underwood Stakes (Gr.1, 1800m). I’ve got a bit of a soft spot for the race as I’ve won it four times.”
Madison County is also in Australia and will start fresh-up in the Gr.1 Rupert Clarke Stakes (1400m) at Caulfield on September 21.
“It’ll be a bit short for him, but then he’ll get up to a mile,” Baker said. “He’s nominated for the Cox Plate (Gr.1, 2040m), but we’ll just see how he comes up.
“As long as I can find horses like them to take over to Aussie I’m happy.”