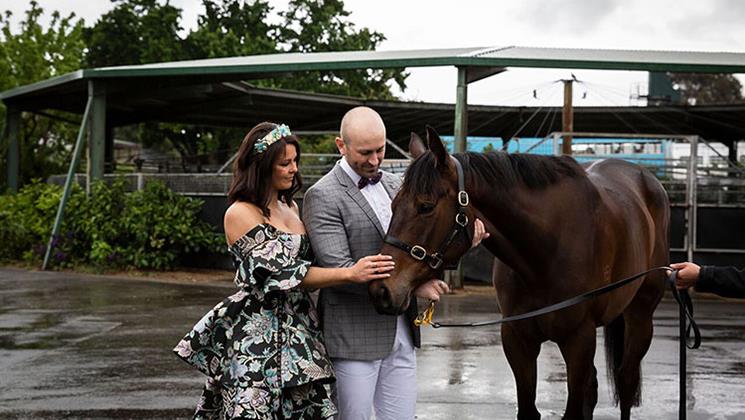 16 July 2019
Rachael and Stephen Harney of Harney Stone Racing Photo: Supplied
​Emerging Australian syndicators Harney Stone Racing celebrated an impressive winning double at Murtoa on Monday with a pair of New Zealand recruits.
The smart victories bookended the nine-race programme at the Victorian track. Hapaira opened the day with a five-length win in the Horsham Doors & Glass Maiden Plate (1100m), then Cataracta romped to victory by six lengths in the CHS Group Horsham BM58 Handicap (1100m). Both horses are trained by Ciaron Maher and David Eustace, and the winning jockeys were Harry Coffey and Linda Meech respectively.
“They both won very impressively,” said Stephen Harney, who founded and runs Harney Stone in partnership with his wife Rachael.
“They were pretty dominant. They both went straight to the front and never gave the others a chance from there. They’re promising horses and we were really thrilled with both of their performances.”
Hapaira is a three-year-old filly by Darci Brahma. She was bred by The Oaks Stud and carried their colours to a trial win at Rotorua on May 5, when she was trained by Stephen Marsh. She is a half-sister to the Gr.3 Cambridge Breeders’ Stakes (1200m) placegetter Show Up.
Four-year-old Niagara mare Cataracta was previously named Gravity Falling. She was bred by Mark Lupton and Bill Thurlow, and the latter trained her to win a trial at Waverley in August of 2017. She is related to a New Zealand racing legend, with her second dam being a half-sister to the eight-time Group 1 winner Veandercross.
Monday’s win at Murtoa was the first raceday appearance of Hapaira’s career, while Cataracta now has two wins and a placing from her six starts.
The pair have provided the perfect start for Harney Stone in their policy of identifying promising New Zealand fillies and mares with trial form.
“They’re the first two horses we’ve brought over,” Harney said. “Hapaira was on debut and Cataracta has now won two from only a few starts, so we couldn’t really ask for better results so far.
“Our reason for sourcing these sorts of horses from New Zealand is that I’ve always loved the breeding programme over there and the quality of horses bred there. We saw it as a great opportunity to tap into the filly market, bring them across and look to get them up over a bit of ground – around 1600m to 2000m. That’s traditionally a real strong point for the Kiwi-bred fillies and mares.
“We’ve worked with Phill Cataldo (bloodstock agent) in securing both of these girls for us. He’s been terrific to work with.”
With a spring in his step following Monday’s results, Harney will be on the lookout for more potential recruits in the weeks and months ahead.
“We’ll absolutely be looking to bring some more horses over,” he said. “You have to try to strike while the iron is hot.
“The right horses will need to come along of course, but we’d certainly like to think it’s onwards and upwards from here.”